Grandpa and the boys spent a day fishing on Lake Superior with the Hang Loose Charter Fishing crew. Without realizing it, they chose the day of the famous Grandma's Marathon. The area was bustling with runners and fans!

After a night's rest at a hotel in Superior, Wisconsin, the boys woke up extra early and headed for the bay.

Caleb added another loon to his collection, which he named Winson.

They arrived a bit early, so the excited lads frolicked in the parking lot.

And they were off! Corbin was just a little excited...

and Alex was annoyed Dad was taking so many pictures!

First the captain had to maneuver through a quiet zone, where the boys spotted a lighthouse.

They all enjoyed talking to the captain and his navigator, but where were all the fish?!?

After about 4 hours, Corbin caught the first and biggest fish of the day, a nice lake trout!

The captain was frustrated! He was radioing all the other charters, asking if they were having any luck. Nope. (I later joked to the boys that the sound of all those runners pounding the pavement must have scared off the fish.)

Finally Caleb got a fish! It was a smaller, but fatter lake trout.

Then Caleb's worst nightmare happened. A thunderstorm was racing towards them. The captain quickly started reeling in the lines and getting ready to get out of there! The wind started howling, and the boys started freaking. They were caught in the storm!

Finally the storm let up, and they arrived safely back at the dock. The captain felt horrible for the lack of fish, so he only charged the gang for half a day. The boys didn't care, though, they loved the experience, and proudly showed off their catch. 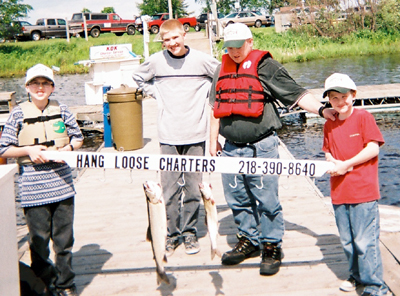 We had fish for dinner a couple nights later, and the boys agreed it was very tasty!

Alex was a good sport about it all, as long as dad wasn't taking his picture.

Then it was time to say goodbye to Chet and Steve and head for home.

On the way they stopped at a park to rest and feed some gulls their lunch they never ate.

That night the boys had trouble sleeping, as the whole world seemed to be rocking back and forth, but by morning they were as good as new.

Nora took a big step shortly after the boys' trip. She finally decided to get her haircut. It would be her first ever, at age 5. Rosa, of course, wanted to get one too!

Here are some before pictures:

We just went to the local barbers. Nora was certain of the style she wanted, and showed the beautician a photo of it from a children's hairstyles book. Rosa said "me too!" They both had hair long enough to donate!

Here's Nora getting her hair cut.

We were all so proud of Nora! This has been a goal we'd set with her OT a year earlier.

The girls are both very happy they got their haircuts. Rosa wasn't so sure about the bangs at first, but now she's gotten used to her new look.

Next stop: our big vacation! But that's another adventure...

Where do you want to go next? Click below: